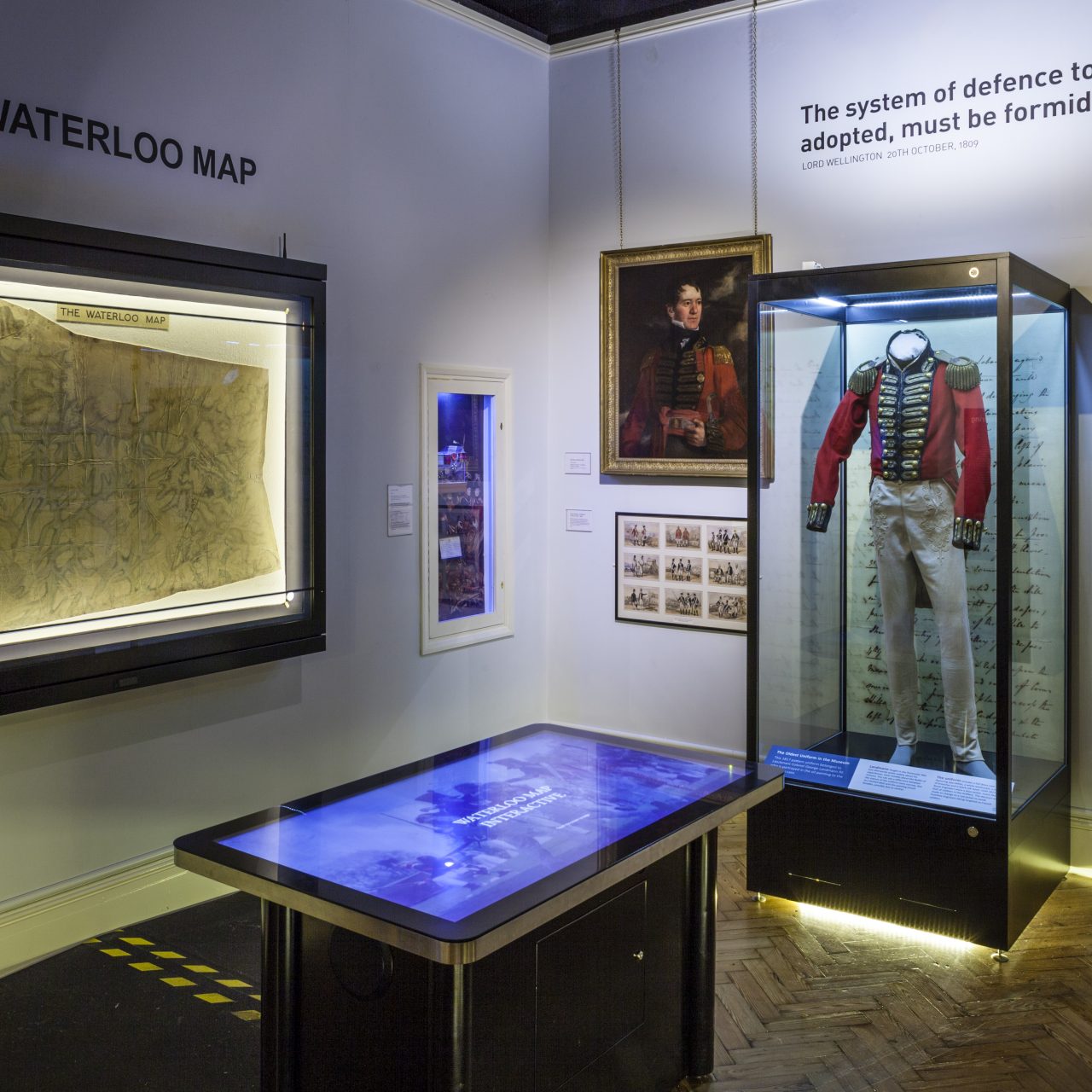 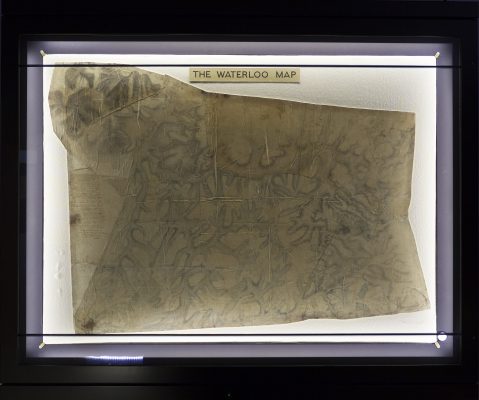 Kent has a place in British history both in the front line and in the ‘back room’ support roles. The pieces of the map were drawn up by a team of Royal Engineer Officers. The map was loaned to the Museum in 1910 by the Museum’s curator Major Harrison who gifted it to the Museum in 1921.

This map was used by the Duke of Wellington before the battle in 1815. The map is made from 10 different pieces of writing material, of varying qualities. The area of the battle itself is visible near the top right of the map. Wellington’s pencil lines are visible here.

The pieces of the map were created by the British Royal Engineers between 1814 and 1815. Much of the map was drawn rather hurriedly, after Napoleon’s escape from the island of Elba. It was a field-sketched plan rather than a fully surveyed map. Wellington asked for the map 2 days before the battle so it could not be reproduced as one singular map, so the 10 original sketches where stuck together and used.

The map was nearly lost when a Royal Engineers officer became involved in a melee at the Battle of Quatre Bras (where he was attempting to deliver the map to Wellington). Waters (the officer) became unhorsed during an assault by French cavalry and then spent the rest of the combat trying to evade capture. His horse had bolted, but by some luck Waters was able to locate it shortly after.

At the battle itself, Quartermaster Sir William De Lancey carried the map on his person, reportedly in his jacket pocket. Sadly, he was mortally wounded by a ricocheting cannon ball which hit him the back. This broke eight ribs and punctured his lung. It was suggested that the dark area at the top of the map was the stain of De Lancey’s blood. It has since been suggested that this was a 19th century attempt at conserving the map. However, there are several accounts which describe the blood.

The map remained at the residence of Carmichael Smyth until his death in 1860. After this it was all but forgotten about. It resurfaced in 1910, when the Royal Engineers Museum received a letter reporting the discovery of the map. A London based bookseller had acquired it with a number of other maps and was willing to sell it. The museum did not have sufficient funds to purchase it at the time, so a Major Harrison (a curator) bought it using his own money and loaned it to the museum. In 1921, he gifted it to the museum.

In 1996, the map was moved to Duxford (Imperial War Museum), where it received some conservation attention. It was noted that the map had discoloured unevenly, this can more than likely be attributed to the period 1860-1910. A conservator found that the map was drawn in iron gall ink, black ink, graphite pencil, grey wash, green wash, and red pigment on 10 pieces of paper. There was a copy made for the Prince of Orange and another copy made in 1846, which resides in the British Library.